We bought a house, and a menu plan

Because really, what would Monday be without a menu plan? :-) And yes, it happened!!! We went very uncomfortably above our asking price, and our offer was accepted! Now we're in the phase of, oh my goodness, this is actually happening. . . . It's not uncommon in our area to bid on 20+ houses, so we were skeptical until we received the final notice that our offer was accepted. We actually found out when we received an automated MLS query update, marking our house as "pending". Technology. ;-)

In other news, we haven't sold our stock market investments yet for our down payment. . . see above note about needing to bid on 20+ houses to get an approved offer. We know many people who looked for over a year, so it doesn't make sense to have a liquid portfolio for that period of time. And, fingers crossed that the market holds steady next week during the inauguration? We also had to agree to a 25 day closing, so things are moving VERY quickly. I spent today gathering paperwork, getting homeowners insurance, and getting the earnest money sorted out on a bank holiday. Of course it's a bank holiday in the US! :-) Wouldn't be a challenge if it was easy.

The market we are buying in is like nothing I've ever seen, and this is my 5th home purchase. . . Speaking of which, we are working to get out of our lease on our rental property & our landlord is fabulous. We're hopeful that we will only need to cover an additional month's rent. Given the inventory of the housing market & general competitiveness on housing, it's near impossible to predict when you will actually buy. So, being out an extra month's rent, while not ideal, is probably best case scenario.

I also think we will sell our Seattle house when our tenant's lease expires at the end of the school year. It's a great investment, and we'd love to hang onto it. But, things will be uncomfortably tight if we do. Lots of financial analysis ahead on that front. I did sell $45 worth of Facebook items, so just right on track for that deposit. ;-)

So, chaos. There you have it. :-) I'll have a bigger update on the financial chaos, our new budget, our mad scramble for a downpayment, etc. But, we're about to become homeowners again, and knowing the path forward (at least in the housing sense) is a huge, huge relief for all of us. The kids are thrilled to be able to stay in the same school district.

Yesterday was another super early soccer tournament, in the 32 degree weather. I got up at 5:00, and we were out of the house by 5:40. The game was much colder than anyone expected (including the weather forecasters). Sam was like a popsicle afterward. He's subbing for the premier league (one up from the league he plays in - top 30 teams in the state, so ridiculously intense), & was on the bench for half of the game. He typically doesn't sub out at his own level, and stays warm by playing for the full hour. I ended up needing to stop at Target for an undershirt for the second game. Didn't get above 40, and was crazy foggy all day. His team lost both games, and will be in sudden death next weekend. Mixed feelings on my side for what happens next. So done with the tournament season! :-) I did pack lunches, brought my Panera gift card, and kept things pretty in check yesterday, minus the unexpected clothes/gloves. Also, my Starbucks app failed a few times while I was in line & I didn't have my gift card on hand, so I ended up having to pay $7 cash for my hot tea & hot cocoa for Sam. 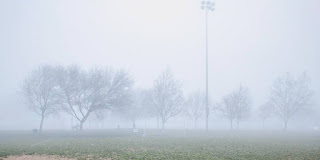 And with that, what were you up to this weekend? How is the housing market where you are at? Is it a buyers market, or a sellers market? Our market is now over $1000/sq foot, which is just sheer madness.
Posted by Hawaii Planner at January 16, 2017