All of the decluttering

I should have taken some pictures, but I've been a busy bee in the afternoons/evenings, without the boys at the house. They are having an amazing time with my parents & nephew (at Disneyland this week), and the pictures are making me so happy. Love to see my parents enjoying their time with the boys.

I've been taking advantage of the errand free evenings by going through the boys rooms, and also just trying to work through our own clutter. I've given away SO much on Buy Nothing, & have listed four items on eBay. I haven't done eBay in months, after I was burned out from a really (cough) foolish buyer.

The house feels so much lighter! Garbage & recycling came out of closets, drawers were organized, holey socks were tossed, the closet was used for...clothing! Old books & toys were given away. Dirty items were washed. It's a miracle. :-)

I also took advantage of a brief break at lunch today, and finally achieved my goal of getting all of last year's zucchini out of the freezer. Only a month behind my goal of managing that before our first zucchini this year. But hey, I'll still take it. I made up a double batch of zucchini fritters, to accompany some leftovers.

I'm also getting organized for next week, when we are back full swing with the boys. The quiet has been lovely, but I'm looking forward to having them back at home again! That means a large Costco stock up trip is probably also in order.

Are you decluttering anything these days?

What about you? What's on your menu this week?
Posted by Hawaii Planner at June 27, 2022 8 comments:

These weeks are a bit different, with mini trips & the kids out of town. But, we're still looking for wins where we can find them.

After three years, they resolved an ads issue

Way, way, way back, I filed a request to allow ads on my site. There was no follow up, and I kept getting a note that the blog was ineligible for ads. Fast forward to today, where I randomly got an email (three years later) that ads are now turned on for my blog. Wow, awesome customer service. ;-)

Apologies, while I fiddle around & make things as minimally intrusive as possible.

The boys are with my parents for the next few weeks, so things are a bit different on the meal planning side. Here's what we're up to! As always, all meals are served with a green salad.

M got the boys escorted successfully at the airport yesterday, despite Nick's protests that they'd be fine on their own. They really feel quite independent. ;-) When M was flying home with the kids from San Diego a month or so ago, they got on board, and realized Sam had left his bag in the boarding area. So, they still require a bit of supervision... Despite what they may think!

It was so quiet in the house last night. No one asking for a ride anywhere. Or, needing additional food. Or, money. We sent quite a bit of money to my parents, because we know how expensive it is to feed these guys, and appreciate their help so much!

Here's what's happening on this lovely Saturday in the bay area:

That's it from my side. What about you? What are you hoping to accomplish this week?
Posted by Hawaii Planner at June 18, 2022 6 comments:

We've made it to Friday! Here are a few wins for the week. I find that, sometimes I really have to search for them, and other weeks, the wins just roll off of the finger tips (while typing). This week was somewhere in between.

It's another busy week, with Nick at camp, and Sam starting his job. There are quite a few logistics involved in the schedule, so hoping for an easy menu this week:

That's it from our side. Nothing complicated this week. What about you? What's on your menu?
Posted by Hawaii Planner at June 13, 2022 5 comments:

We have a really busy week ahead, and I have a morning meeting tomorrow that I'm absolutely dreading. As I'm trying to put a positive spin on it for myself, maybe that means I'm getting the hardest part out of the way early, and the rest of the week will be a breeze! (I can dream. ;-))

Sam starts his job tomorrow, and Nick is unexpectedly around for a local tennis camp (he was originally at a residential camp, but they cancelled it *very* last minute, which throws all of the logistics up in the air.)

Here's what I have on the agenda for today:

I don't think I'll get a chance to sit by the pool, but I think it will be too hot for that to be really enjoyable anyway.
I'm going to keep posting Hawaii pics, I think. The hotel had so many lovely elements to enjoy! 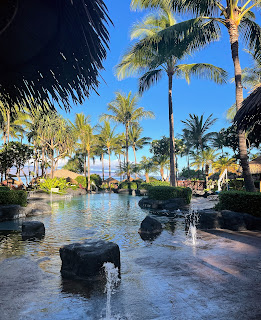 It's been a busy day around here, with lots going on & plenty of chores, catching up from being out of town last weekend.

I set the alarm this morning, so I could make Sam breakfast & wake him up for a ride to a soccer tournament. His friend's mom picked him up at 7:20, so it was an early start to the day.

I worked out this morning, and ran a few errands (Costco & the grocery store, plus a couple of stops for Nick to get some new clothes/shoes). The price of groceries! Oh my. I'm usually not at Costco (that's M's job), so I was blown away by the price increases since I've last been there.

Nick has grown another few inches, and slimmed down even more (all of that tennis, plus a growth spurt), so he needed a few additional items.

Nick & I had just finished unloading the car, and my friend called. Sam's buddy was injured during the game (broke two bones in his wrist) & I needed to come pick up Sam & another player. The field was about an hour away, and I got there just as the whistle was blowing at the end of the game. I feel terrible for Sam's friend, who is spending the afternoon at the ER, as the local urgent care couldn't set the bones. The poor kid is in a ton of pain, and it's a lengthy wait.

Sam & the other friend I picked up were exhausted & dehydrated, as they ended up not having any subs, and had played two full games in 90+ degree weather. We stopped at 7-Eleven for drinks, as I didn't have time to pack anything from home. Everyone was a bit more enthusiastic after they'd hydrated a bit.

Nick is helping out his tennis coach today (and, potentially for a few other weeks this summer), as the coach needs to rest up after surgery. Nick is fetching balls, and keeping an eye on some of the younger age group lessons, which the coach really appreciated, as it's so hot here. Having a teen to run around for you would definitely make the lessons easier!

I'm planning on staying cool for the rest of the day, catching up on laundry, watering the plants, and making an easy dinner. Otherwise, I need to start working on a few packing lists, have the boys help me make Father's Day cards, & the like.

And, another of my favorite Hawaiian flowers. Dreaming of last weekend, on the beach! 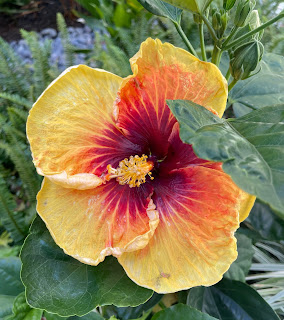 What are you up to today?

Not really much of a frugal Friday

There were minimal frugal wins on our vacation, but we had a fantastic time.

And, a few photos of our trip. 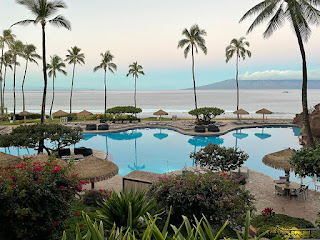 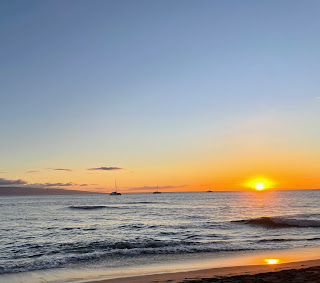 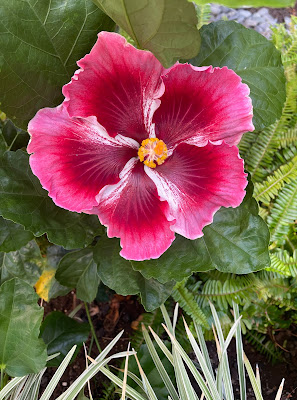 The weather was great, the hotel was lovely & our time together was very fun. Most importantly, my mom had a wonderful time, & was so appreciative of the birthday celebration, which is really all you can ask for!

I'll be back with a real update soon. Hope everyone is well.

The week ahead is expected to be fabulous, but not frugal, with a trip to Hawaii. I focused on cleaning out the fridge as much as possible before I left. M tends to not be on top of creative menus, and using up leftovers.

June promises to be a fun month, with a lot going on! My sister & I are taking my mom to Hawaii, Nick is doing a few summer camps (including a residential tennis camp at a college), Sam starts his job, & M & I have a few weekend getaways planned.

Here are my goals for the month!

What about you? What are your goals for June?
Posted by Hawaii Planner at June 01, 2022 10 comments: