After a very early soccer morning (3-1 victory for Nick), & a less victorious game (1-7) for Sam (and Nick, who was subbing), I took the boys & a bonus friend to lunch at In & Out. Nick was in at goalie against the best team in our league (a year up for him) & did an amazing job staying focused, even though the other team put up so many amazing shots. He had some great blocks, and stayed positive despite the challenging game.

As a special treat, I took the boys & their friend to lunch, where they each proceeded to eat two cheeseburgers, fries & a milkshake. We started with one burger each, and they were all still quite hungry & polished off a second burger each in no time. Luckily, it only came to $30. Oh, how I wish I could still eat two burgers, fries & a milkshake. ;-)

Once soccer was done for the day, I dropped Nick & bonus friend off for a sleepover, and went into the local grocery store for hamburger buns. Hamburgers are actually on the menu for tonight (although, I doubt anyone will be in the mood, and we will likely swap things around), and while Michael & I prefer them without a bun, the boys both enjoy them with a slice of cheese on a bun. I always walk through the clearance aisle, and the clerk was just stocking the shelves. Huge scores!

Here's what we got (and, I should have been reviewing the register as things were rung up, as you can see, but was distracted by the bagger, who dropped a bunch of stuff on the floor & we were trying to pick it up). 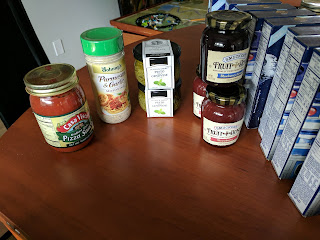 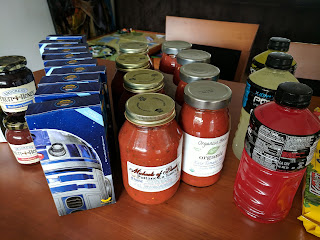 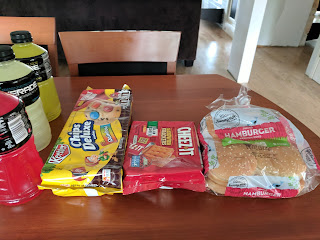 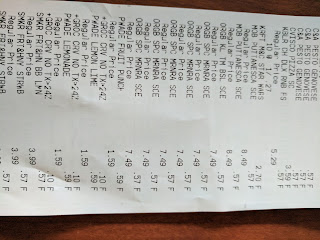 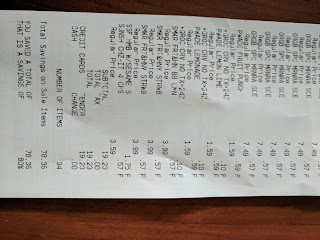 Total spent = $19.23. And, after the credits I'll receive, it' will really be around $16! Super excited to stock the pantry for that price.