I definitely felt like I was back into my soccer mom routine yesterday, with an 8:00 am game (field arrival at 7:15, & setting the alarm for 6), and an afternoon game. The first game was really enjoyable to watch. The second was in my top five least favorite games I've ever spectated. Some parents are just obnoxious, and some teams don't demonstrate good sportsmanship. I'll leave it at that.

After the terrible second game, I treated Sam to a Slurpee from 7-11. This is an unheard of treat in our house, but he'd played 180+ minutes of soccer, and 90+ minutes of warm ups, so he'd burned plenty of calories. ;-) Luckily, the Slurpee cheered him right up, and by the end of the ride home, we were laughing about the chaos of the other team & their poor behavior.

The boys were on spring break last week, so my parents helped out with activities & taking them to fun events while M & I worked. It was great. They took Sam surfing on Wednesday in Santa Cruz, Nick & my dad went on long bike rides together, and my parents are also awesome & cooked plenty of food for us. We were sad to see them go on Friday, but are now getting back into our routine.

Tomorrow kicks off the official "start" of the school year, with Sam needing to be at the school by 8:00 am. Both boys bike to school, so it will be an early morning & a big transition from the online learning schedule. :-) We're excited to have him back in school. He's also getting twice weekly COVID testing (for his soccer team). We're hoping he will be eligible for the Pfizer vaccine soon, as he's 15.

Last night's dinner was a team effort. M grilled steaks (from the freezer), I sauteed baby bok choy that M came home with, and Nick made delicious French bread. It's supposed to be really warm today (80+), so M is grilling hot dogs & corn, while I'll make a salad.

Nick has been buying & fixing up bikes for the last year, and then selling them to make money for a new bike for himself. He's also been doing lots & lots of chores for us, to earn extra money. A year later, he finally had enough for a new bike, so he's been getting in lots of riding. Boys on bikes make me happy. It's such a positive childhood experience, that doesn't allow for any technology! 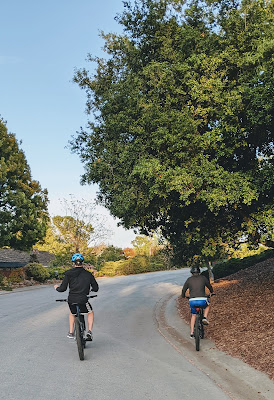 That's it at our house. What about you? What are you up to this weekend?